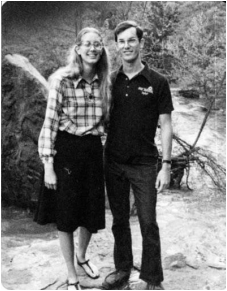 The Lord Jesus Christ marvelously and miraculously filled Mike Campeau with the Holy Spirit on November 4, 1977 at a U.S. military compound 8 miles from the DMZ in the Republic of South Korea.  Two days later he was baptized in the name of the Lord Jesus Christ at the United Pentecostal Church International Bible College in Seoul.  He was 24 years old.  Robin Reynolds was filled with the Holy Spirit when she was 10 years old in California.  She was later baptized in the saving name of Jesus.  Uncle Sam brought Mike to Ft. Belvoir, Virginia in January, 1978 and Robin’s family to Quantico Marine Base later that year.  They met in the early Spring of 1978 at the United Pentecostal Church in Arlington and were married April 27th, 1979.  The Lord soon added a wonderful daughter to the family and through the years of their marriage they were blessed with five healthy children.

Although Pastor Campeau excelled in the military, he felt directed of the Lord to resign his commission, find work in the Northern Virginia area, and do all he could to assist Pastor and District Superintendent James Kelley.  After a brief job attempting to sell life insurance followed by unemployment, an opportunity opened for Pastor Campeau to work as a defense contractor.  During the later part of his 3 and ½ years with CACI Inc., Pastor Campeau was informed that he had been identified for a special fast track management program.  Pastor Campeau returned to his office, closed the door and wept.  His heart simply was not in accomplishing great things in the secular world.  Through this event and in pouring out his burden to reach people with the gospel of Jesus Christ, he realized and accepted his call from God to ministry and specifically to Fredericksburg, Virginia to start a home mission’s work.

For one year beginning in about October of 1982, Pastor and Sis. Campeau, and their daughter Michelle drove from Alexandria, Virginia to Fredericksburg each Friday evening to hold services.  Judy Butler and her daughter Tracy, who had moved to Fredericksburg, but continued to attend the church in Arlington were they were first members.  For the first month, they met in the basement of a financial investment firm, using their large open conference room.  Pastor Campeau led the small two family congregation in a cappella worship and preached.  Next the small congregation met for about 18 months in a classroom of an old elementary school that had been converted into a community center.  Jerry and Stephanie Grani, friends from the United Pentecostal Church in Arlington drove down each Friday evening and led the worship.

In March, 1983 tragedy struck and Benjamin Campeau, Pastor and Sis. Campeau’s first born son, died soon after his premature birth.  In October 1983, the Campeau’s moved to Fredericksburg and rented a home in Ferry Farm, near George Washington’s boyhood home.  The church was affiliated with the United Pentecostal Church International and simply called the United Pentecostal Church.  Later, because of the noise from a Christian Rock Band in another room in the old school, Pastor Campeau moved the church to their home in Ferry Farm.  Worship services were in a finished in the basement, large enough to fit pews donated from a remodeling project at the Arlington home church.  Sunday School was in the kitchen, dinning room or carport depending on the time of year.  The Campeau family continued to drive the 1&1/2 hours to Arlington for Sunday evening services.

Spiritual oppression seemed almost overwhelming from the beginning.  However, the Lord brought wonderful people into the church, some who already had the Holy Spirit and others who were filled and baptized.  Among them were Sis. Elma, a Philippino nanny and servant to an extremely wealthy Iranian family with connections to world leaders.  During their stays in the Fredericksburg area, Sis. Elma would spend the weekend with the Campeau’s, dropped off on Fridays evenings and picked up by the local butler on Mondays mornings.   Joyce Silva, Sis. Campeau’s mother moved to Fredericksburg and became a member of the church.  And, a bundle of joy arrived in the lives of Pastor and Sis. Campeau with the birth of their second daughter, Jennifer in February 1985.  Nevertheless, the ministry came to a cross roads - close up and move back to the Arlington home church or keep going.  After an extended time of prayer and fasting, Pastor Campeau felt directed to stay on and continue the work.

Very soon afterward, the Fincham family moved into the area from Maryland.  Bro. Fincham lived next door to a retired UPCI church planter, Bro. and Sis. Matthias and were won to the Lord.  The Hoffman and Merritt families began attending the small church.  The congregation enjoyed the home atmosphere and the burning logs in the basement sanctuary fireplace on cold winter Sunday mornings adjacent to the pulpit.  Holy Ghost fire also prevailed in the ministry of the word of God and upon the congregation as God did marvelous things.  The church met at Ferry Farm for about 2 years; and then, in the fall of 1985 the Campeau’s moved to a larger rented residence in the city of Fredericksburg to accommodate Sis. Silva who was terminal battling cancer and the church.  Again, the basement was the sanctuary and the kitchen, living room, and carport were the classrooms.  Pastor Campeau had the added benefit of an unfinished utility closet for an office.  The Davis and McClung families, among others, joined the church during the year or so that it met in the Fredericksburg home.  Additionally, after looking at purchasing 3 dilapidated properties, zoned for church use, the church received a Christmas for Christ grant of $5,000 and obtained a mortgage to purchase 9.25 acres in Spotsylvania County.

In 1986, the rented Northside Baptist Church on Thursday evenings and Sunday afternoons for about 18 months; that is, until Northside's pastor’s daughter and a evangelist’s son visited during a Sunday worship service.  The Holy Ghost fell powerfully and wonderfully in those services.  Northside's pastor asked Pastor Campeau to move the church elsewhere immediately.  Having nowhere to go, the congregation moved back into the Campeau’s home in 1987.  That year, the United Pentecostal Church of Fredericksburg gave the 7th largest Sheaves for Christ offering in North America.  In October, 1987 Matt Campeau decided to join the Campeau family early.  By the grace of God, he grew healthy and without the normal complications of premature birth.  There were many times of anointed ministry and powerful prayer meetings.  The Gibson family, among others, was added during this time.  And, Caleb Campeau joined the growing family in May 1989.  Attendance averaged about 35.  Finally, an official with the Fredericksburg city government called and threatened legal action, if the church continued to meet in the home.  Pastor Campeau again contacted pastors in the area to see if they would rent their building on off service times.  Finally, he was directed to the pastor of small church who was head of an inter-denominational ministerial association.  He agreed to rent their store front building in the historic area of downtown Fredericksburg.

Beginning in the fall of 1989, the congregation began meeting at Grace Fellowship Church for about 7 years, again on Thursday evenings and Sunday afternoons.  The church continued to experience the ebb and flow of growth and loss, as they had done over the years.  Attendance at the Grace Fellowship store front over the years dropped as lowed as the mid 20’s, peaked in the low 70’s, and averaged about 35.  During this time, a developer approached the pastor about buying the church property.  Instead, a contract was agreed upon in which the developer would provide roads and utilities.  In return, the church granted access to the state road, Chancellor Drive, and awarded frontage house lots to compensate for his cost.  After 3 years, the developer finally completed the subdivision and the church was left with 4&1/2 acres and several thousands of dollars from the sell of house lots.  Church member trustees decided the church should acquire an abandoned farmhouse adjacent to the church property and provide $70,000 for its renovation.  Given what the Lord had done under Pastor Campeau’s leadership, coupled with the fact that Pastor and Sis. Campeau had labored in behalf of the church for 10 years without salary and still lived in a rented house; they approached the church family.  The congregation voted unanimously to do so.  The home was acquired and given to the Campeau’s, and the outside and 2/3 of the living area was renovated.  And, in May of 1993 Stephen Campeau was added to the Campeau family.

In 1994, James McGhee Architects PC was hired.  Eventually, a design was settled upon, excavation work completed, and the church building raised.  A mortgage was secured to complete the first floor, leaving the basement unfinished.  The building construction was accomplished over 18 months using much volunteer help to stay within budget.  The work was finished just in time.  The owner of the historic store front church closed out the lease to renovate the building for commercial use.  Both churches had to find another place to worship.  For one month, our church meet briefly in the old elementary school where it started in earnest before the new building at 11506 Brian Drive was approved by the county for use.  The first service was held on Father’s Day, June, 1996.  Our Eternal Father had provided marvelously for His Bride.

Later, the developer donated an acre of ground adjacent to the church property.  It was later sold for almost $90,000.  The funds were used by the church to start the build out of the basement.  This project took 5 years to complete and was set back by commercial building code issues and insufficient funds, but by the grace of God and the volunteers who labored to complete it, the work was finished in March 2010.

The church was renamed the Walnut Hills United Pentecostal Church to help locate it inside the housing subdivision called by that name.  Bilingual English-Spanish services were added and in February 2009, Iglesia Piedra del Angulo began separate mid-afternoon Sunday services under the ministry of Adonai and Judy Tenas.  God is good!